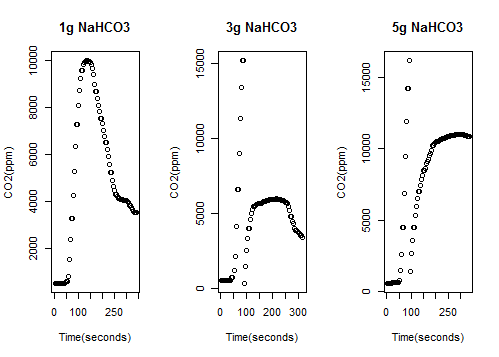 The Kruskal-Wallis rank sum test showed that the sensor was sensitive to varying amounts of NaHCO3 both in the field (p=2.2e-16, df=2)  and in the lab (p=2.2e9, df=2). Results from the Dunn Test showed that the sensor was sensitive to all concentrations of NaHCO3, both in the field and in the lab. Lab recordings of CO2 showed greater peaks (maximum= 16,158ppm) than in field recordings (maximum= 3304). In the field, the addition of 1g of NaHCO3 showed a continuously rising production of CO2 in the chamber while 3g and 5g both saturate approximately at 150 seconds and less CO2 is detected from the sensor over time. In the lab, 1g of NaHCO3 saturates in producing CO2 at approximately 125 seconds while 3g and 5g produce peak CO2 levels much sooner (<100 seconds) but then immediately drop to as little as 0ppm then rise slightly before stabilizing.